I’ve written entire articles on the fact that fat content is the primary driver of glycemic index. It’s silly to demonize white potatoes due to high GI when a couple pats of butter – or simply consuming it as part of a PHD-compliant high-fat meal – will drop it far more than substituting a sweet potato.

J Stanton has noted that adding a little fat to a starch is very effective in lowering its GI. In a post titled “Fat and Glycemic Index: The Myth of Complex Carbohydrates,” JS states that:

Flour tortillas have a GI of 30, compared to a GI of 72 for wheat bread, because tortillas are made with lard.
Butter reduces the glycemic index of French bread from 95 to 65.
A Pizza Hut Super Supreme Pizza has a GI of 30, whereas a Vegetarian Supreme has a GI of 49.

But another paper shows that gastric emptying rate is even more closely tied to peak blood glucose level than it is to glycemic index.

[D]airy products significantly reduced the GI of white rice when consumed together, prior to or after a carbohydrate meal.

It is not likely that dairy fat alone was responsible, because whole milk worked better than butter. However, low-fat milk only reduced the GI of rice by 16%, while whole milk reduced it by 41%. So clearly dairy fats are part of the recipe, but not the whole story; whey protein may also matter.

It's Time to Let Go of The Glycemic Index
The glycemic index (GI) is a measure of how much an individual food elevates blood sugar when it's eaten. To measure it, investigators feed a person a food that contains a fixed amount of carbohydrate, and measure their blood glucose response over time. Then they determine the area under the glucose curve and compare it to a standard quickly digesting food such as white bread or pure glucose.

Each food must contain the same total amount of carbohydrate, so you might have to eat a big plate of carrots to compare with a slice of bread. You end up with a number that reflects the food's ability to elevate glucose when eaten in isolation. It typically depends on how quickly the carbohydrate is absorbed, with higher numbers usually resulting from faster absorption.

The GI is a standby of modern nutritional advice. It's easy to believe in because processed foods tend to have a higher glycemic index than minimally processed foods, high blood sugar is bad, and chronically high insulin is bad. But many people have criticized the concept, and rightly so.

Blood sugar responses to a carbohydrate-containing foods vary greatly from person to person. For example, I can eat a medium potato and a big slice of white bread (roughly 60 g carbohydrate) with nothing else and only see a modest spike in my blood sugar. I barely break 100 mg/dL and I'm back at fasting glucose levels within an hour and a half. You can see a graph of this experiment here. That's what happens when you have a well-functioning pancreas and insulin-sensitive tissues. Your body shunts glucose into the tissues almost as rapidly as it enters the bloodstream. Someone with impaired glucose tolerance might have gone up to 170 mg/dL for two and a half hours on the same meal.

The other factor is that foods aren't eaten in isolation. Fat, protein, acidity and other factors slow carbohydrate absorption in the context of a normal meal, to the point where the GI of the individual foods become much less pronounced.

It's time to put my money where my mouth is. Researchers have conducted a number of controlled trials comparing low-GI diets to high-GI diets. I've done an informal literature review to see what the overall findings are. I'm only interested in long-term studies-- 10 weeks or longer-- and I've excluded studies using subjects with metabolic disorders such as diabetes.

The question I'm asking with this review is, what are the health effects of a low-glycemic index diet on a healthy normal-weight or overweight person? I found a total of seven studies on PubMed in which investigators varied GI while keeping total carbohydrate about the same, for 10 weeks or longer. I'll present them out of chronological order because they flow better that way.

Study #1. Investigators put overweight women on a 12-week diet of either high-GI or low-GI foods with an equal amount of total carbohydrate. Both were unrestricted in calories. Body composition and total food intake were the same on both diets. The reason became apparent when they measured the subjects' glucose and insulin response to the high- and low-GI meals, and found that they were the same! 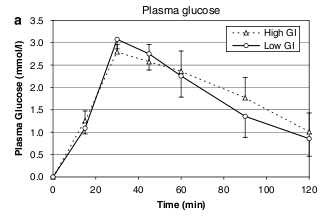 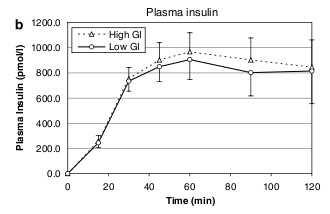 Study #2. Investigators divided 129 overweight young adults into four different diet groups for 12 weeks. Diet #1: high GI, high carbohydrate (60%). Diet #2: low GI, high carbohydrate. Diet #3: high GI, high-protein (28%). Diet #4: low GI, high protein. The high-protein diets were also a bit higher in fat. Although the differences were small and mostly not statistically significant, participants on diet #3 improved the most overall in my opinion. They lost the most weight, and had the greatest decrease in fasting insulin and calculated insulin resistance. Diet #2 came out modestly ahead of diet #1 on fat loss and fasting insulin.

Study #3. At 18 months, this is by far the longest trial. Investigators assigned 203 healthy Brazilian women to either a low-GI or high-GI energy-restricted diet. The difference in GI between the two diets was very large; the high-GI diet was double the low-GI diet. Weight loss was a meager 1/3 pound greater in the low-GI group, a difference that was not statistically significant at 18 months. Insulin resistance and fasting insulin decreased in the high-GI group but increased in the low-GI group, also not statistically significant.

Study #4. The FUNGENUT study. In this 12-week intervention, investigators divided 47 subjects with the metabolic syndrome into two diet groups. One was a high-glycemic, high-wheat group; the other was a low-glycemic, high-rye group. After 12 weeks, there was an improvement in the insulinogenic index (a marker of early insulin secretion in response to carbohydrate) in the rye group but not the wheat group. Glucose tolerance was essentially the same in both groups.

What makes this study unique is they went on to look at changes in gene expression in subcutaneous fat tissue before and after the diets. They found a decrease in the expression of stress and inflammation-related genes in the rye group, and an increase in stress and inflammation genes in the wheat group. They interpreted this as being the result of the different GIs of the two diets.

I have a different interpretation. I believe wheat is a uniquely unhealthy food, that promotes inflammation and general metabolic havoc over a long period of time. This probably relates at least in part to its gluten content, which is double that of rye. Dr. William Davis has had great success with his cardiac patients by counseling them to eliminate wheat. He agrees based on his clinical experience that wheat has uniquely damaging effects on the metabolism that other sources of starch do not have.

Study #5. This is the only study I've seen that has found a tangible benefit for glycemic index modification. Investigators divided 18 subjects with elevated cardiovascular disease risk markers into two diets differing in their GI, for 12 weeks. The low-glycemic group lost 4 kg (statistically significant), while the high-glycemic group lost 1.5 kg (not statistically significant). In addition, the low-GI group ended up with lower 24-hour blood glucose measurements. This study was a bit strange because of the fact that the high-GI group started off 14 kg heavier than the low-GI group, and the way the data are reported is difficult to understand. Perhaps these limitations, along with the study's incongruence with other controlled trails, are what inspired the authors to describe it as a pilot study.

Study #6. 45 overweight females were divided between high-GI and low-GI diets for 10 weeks. The low-GI group lost a small amount more fat than the high-GI group, but the difference wasn't significant. The low-GI group also had a 10% drop in LDL cholesterol.

Study #7. This was the second-longest trial, at 4 months. 34 subjects with impaired glucose tolerance were divided into three diet groups. Diet #1: high-carbohydrate (60%), high-GI. Diet #2: high-carbohydrate, low-GI. Diet #3: "low-carbohydrate" (49%), "high-fat" (monounsaturated from olive and canola oil). The diet #1 group lost the most weight, followed by diet #2, while diet #3 gained weight. The differences were small but statistically significant. The insulin and triglyceride response to a test meal improved in diet group #1 but not #2. The insulin response also improved in group #3. The high-GI group came out looking pretty good.

Overall, these studies do not support the idea that lowering the glycemic index of carbohydrate foods is useful for weight loss, insulin or glucose control, or anything else besides complicating your life.