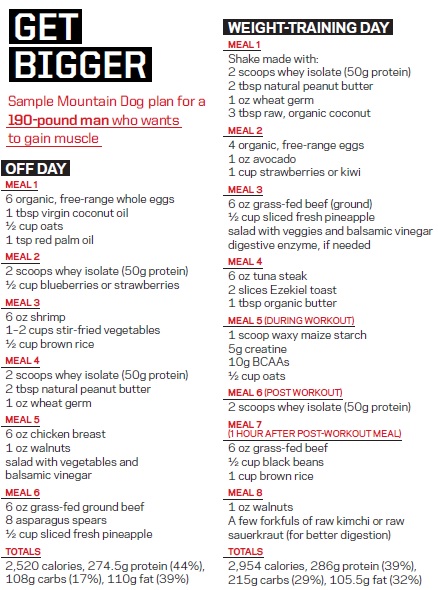 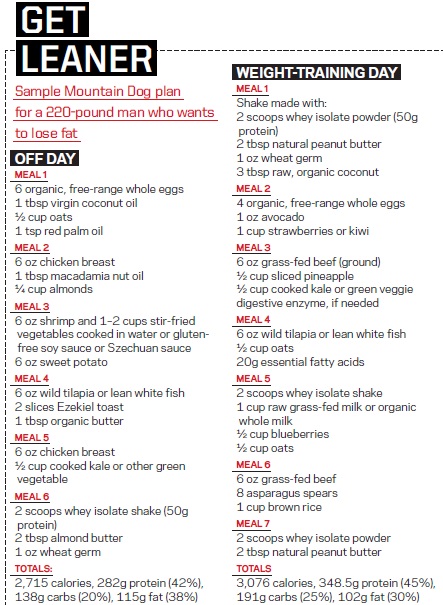 The Mountain Dog Diet Confident he’d found a superior nutritional strategy, Meadows began posting on online message boards, writing articles for bodybuilding Web sites, and consulting for other bodybuilders. “I competed against a client of his, and I was really impressed with his conditioning,” says Brad Davis, an NPC national competitor who started working with Meadows in 2009. The results were twofold. “My cholesterol really dropped within a year’s time, and I actually got stronger when I was dieting for shows,” Davis says. “I usually get weak as a kitten as a diet goes on, but I was pushing weight three weeks out from a show that on my regular diet I could do only 12 weeks out. All my lifts were up.” While his carbs were very low as competition neared, Davis says the fat in his diet helped him retain muscle fullness as well. Davis placed eighth as a light heavyweight in the 2010 NPC USA Championships. Meadows himself competed in the Mr. Ohio contest that year and won first place in the light heavyweight class. “People asked me what I ate and I told them, ‘whole eggs cooked in palm oil, and beef,’ ” he says. “They were like, ‘What?’ ” Most impressively, Meadows has been able to restore his own health completely and maintain it even through the stresses and restrictions of a contest. “I got more blood work done right after the Mr. Ohio. My HDL cholesterol was at 60. Other bodybuilding gurus can get you ripped fast, but I think this diet will get you there quicker because your body is more efficient. We have found a way to be a competitive bodybuilder and still be healthy. These two things are very independent of each other, generally speaking.” Today, Meadows is a certified sports nutritionist (CISSN), and offers training and nutrition coaching on his site, mountaindogdiet.com (named for the Internet message board handle he used, which he created in honor of his pet Bernese mountain dog). At 39, Meadows walks around at 230 pounds and 9% body fat, and has gotten as low as 4% for contests using his approach.
How exactly does he do it? Here are the main points. Eat organic. Toxins are stored in fat. If you eat conventionally raised meat, you increase your chances of taking in steroids, hormones, and other chemicals that affect your ability to lose fat and stay healthy. “It’s funny, but when you first start eating mostly organic food, you feel like crap,” says Meadows. “It’s your fat cells releasing all the toxins that have built up inside you. Then you feel good. I tell people to be patient.” Eat organic meat and eggs whenever possible. Any milk you drink should be from grass-fed cows, and non-homogenized. Raw milk is the best option, as it will contain all the necessary enzymes your body needs to digest it, but it’s not easy to come by unless you’re part of a farm co-op group. Eat more fat. Half the composition of your cell membranes is saturated fat, so it’s essential for healthy functioning. It also makes for stronger, more supple joints. Meadows has competed in bodybuilding since the age of 13. He says his joints have never felt better than they do now, when his saturated fat consumption is at its highest. Fat is also key for absorbing fat-soluble vitamins like vitamin A, which encourages protein turnover and, indirectly, muscle growth. If you’re bulking up, fat allows you to eat fewer carbs overall because it’s so calorically dense. Cut back carbs. “All degenerative diseases—such as dementia, heart disease, and arthritis—can be tied to high blood sugar,” says Meadows. When you eat lots of carbs, your blood sugar elevates, and then the hormone insulin kicks in to bring it back down. In doing so, it takes the calories you’ve consumed and stores them as fat. It also causes the saturated fat you consume to raise cholesterol and triglyceride levels— hence the harm saturated fat has been associated with over the years. Once your blood sugar is low again, you’re hungry, and your instinct is to eat more carbs to bring up your blood sugar. “It’s a perpetual cycle,” says Meadows. “The higher your fat intake, the lower your carbs need to be,” says Meadows. “If you find you’re getting fat, you didn’t lower your carbs enough.” Meadows recommends having conservative portions of carbs, such as a cup of oats, mainly around workout time. While this shouldn’t raise your blood sugar significantly, you can lessen any spike with some fat (try adding two tablespoons of almond butter). Consume prebiotics and probiotics. These two kinds of healthy bacteria help make digestion more efficient. Take supplements. Meadows recommends taking alpha-lipoic acid for liver health and for its ability to lower blood sugar. Digestive enzymes are great when you’re bulking and have to take in a lot of food—they’ll reduce any gas and bloating.